Papua New Guinea’s 3rd National Coffee Cupping Competition was held on the 15th to the 19th of August in Lae City in Papua New Guinea. After 18 hours, I finally arrived at the Lae International Hotel after travelling through Brisbane, Port Moresby and then on to Lae City. Lae is a beautiful place with the highlands about 3 hours north of the city. It is lush and tropical and humid. 3rd world country yes, but boy is it beautiful!

This year, we had 128 samples from different producers to cup and judge. The aim is to whittle that list down to 10 of the best coffees in PNG. The farmers that produced the coffees are then awarded. 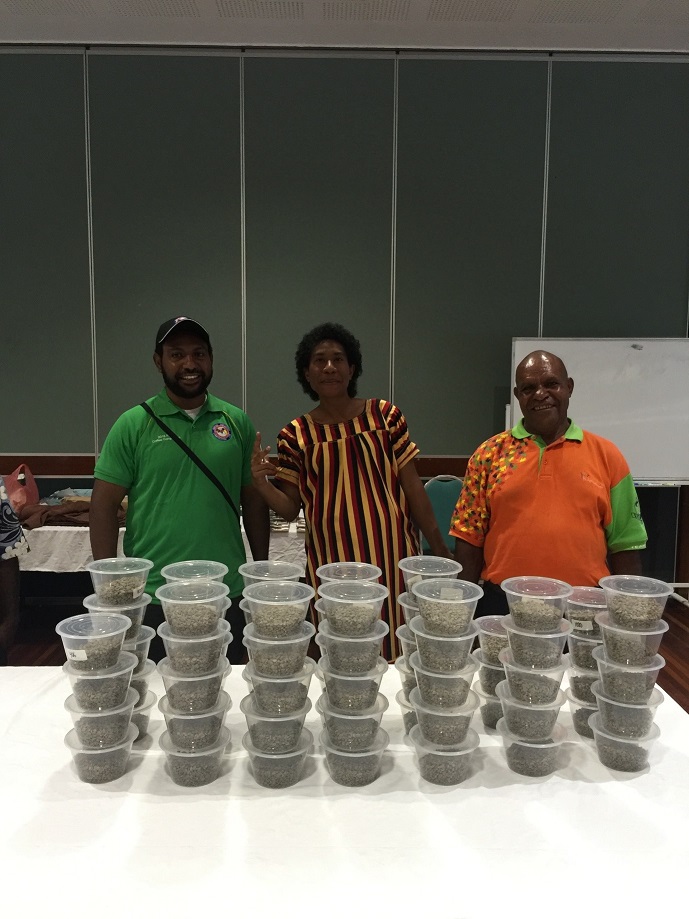 Some of the samples that we were going to cup

The aim of this competition is the encourage farmers to improve the way they farm and process and to show them that their coffee can and will fetch a higher price if they improve on their quality. Interest and momentum for this competition has been steadily building up over the last 3 years. In the inaugural year of the competition in 2014, 69 coffees were entered, the following year saw 79 coffees entered and a whopping 128 coffees this year! It’s really heart-warming to see the farmers coming on board and seeing that quality is where it is at.

The judging panel sees 8 foreign cuppers, all Q graders, coming from Hong Kong, New Zealand, Costa Rica, Korea and of course, Australia. There were also 4 local cuppers joining us, led by the Head of Quality Control of the Coffee Industry Corporation, Rose Romulus. One of the main reasons for the local cuppers to cup with us is for them to learn as much as they can from us. Training up the locals to do what we do would ensure that quality can be measured by them whenever the need arises without having a contingent of foreign cuppers flying to PNG to do it. The goal was to cup the 114 Arabica samples over two days and the top 24 will be cupped on the third day. Out of these 24 coffees, the top 10 will be judged amongst themselves on the last day. We will also be judging 14 Robusta samples which will be pretty interesting for me. I grew up drinking Robusta coffee in Singapore and I guess this is the time for me to give back! 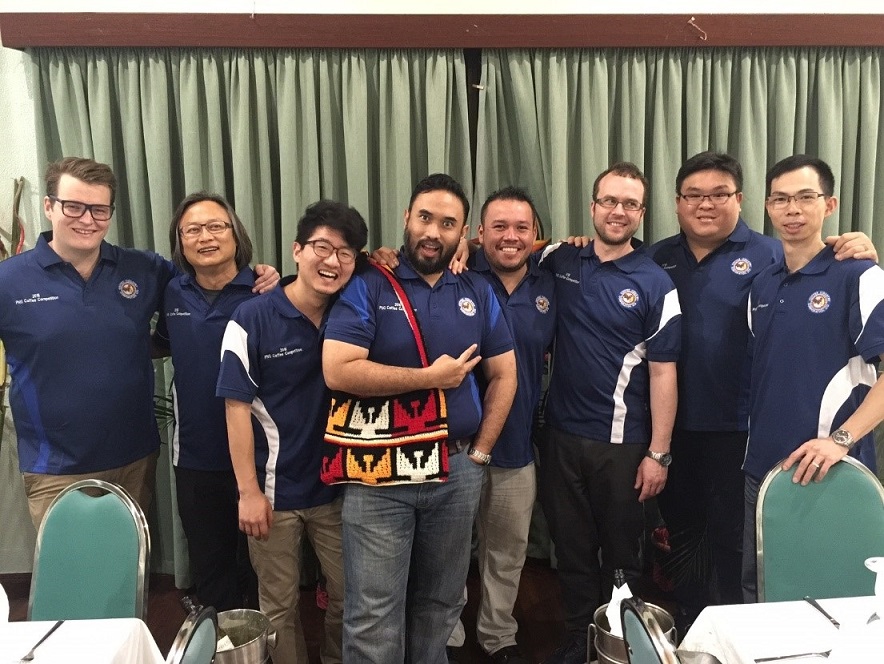 Day one started with us preparing for the next three days of cupping and judging. We measured the moisture content of the green beans, roasted up the samples, checked the grind settings and Total Dissolved Solids (TDS) of the brew ratio and we also did a calibration for the judges where we put 8 different samples on the table and then scored them as we would in the competition. We then sat down to compare scores and calibrated against one another’s scores to ensure that everyone was on the same page in regards to what we were tasting. I’m glad to report that I’m right smack on the money (mostly) in how I scored the coffees! 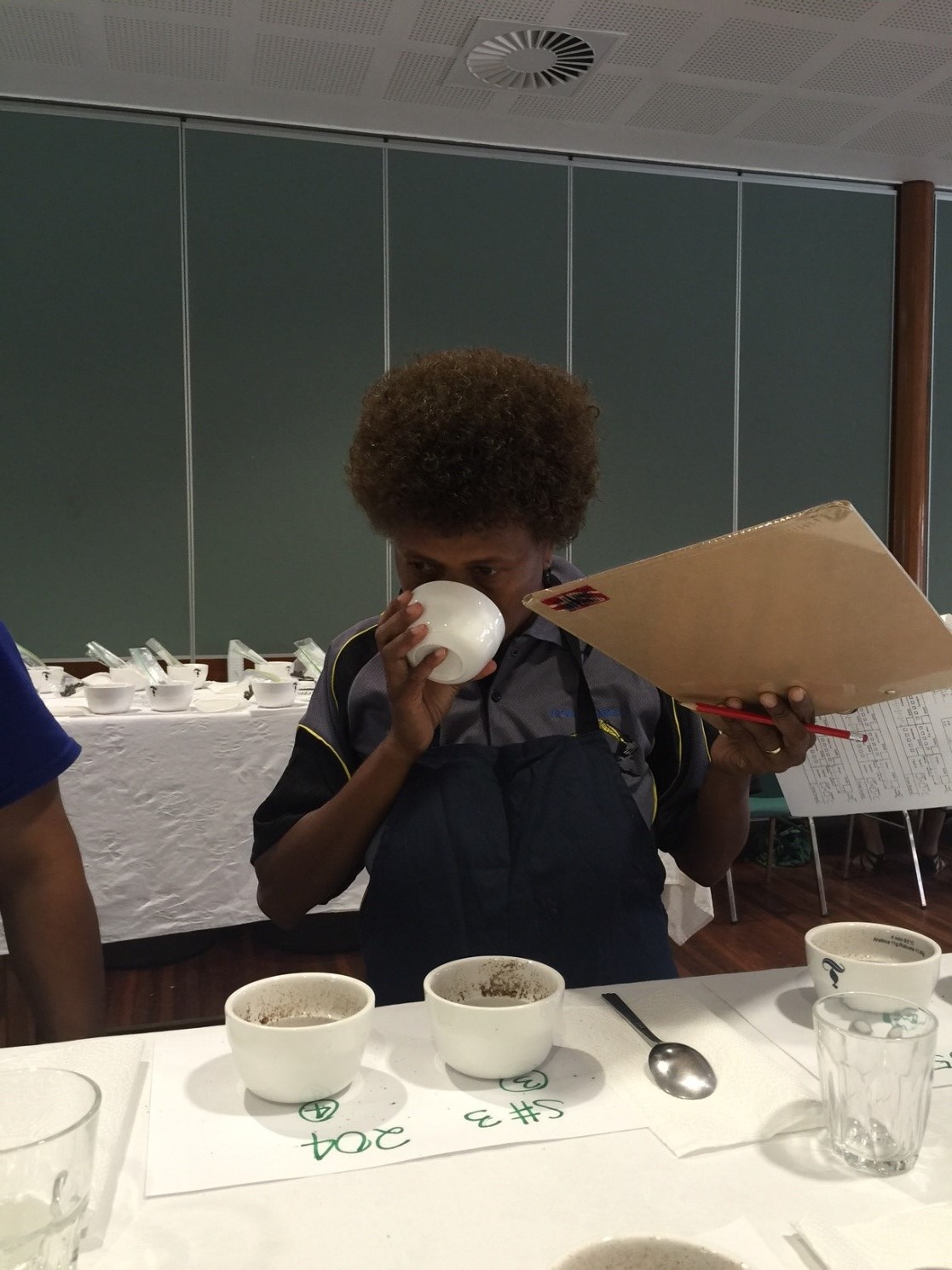 The evening of Day one saw the opening ceremony of the competition. It was the first year that the opening ceremony saw quite a few local dignitaries come join us. We were greeted by a traditional bamboo band where the locals played bamboo tubes cut to specific pitches. What an amazing sight and sound. We were then lead to the conference room by Mudmen who are traditional warriors wearing nothing but leaves to cover their modesty and a helmet made out of mud! There was a plethora of speeches given by the various dignitaries and also Rose who introduced all of the International Cuppers. We were then treated to canapes and cocktails. 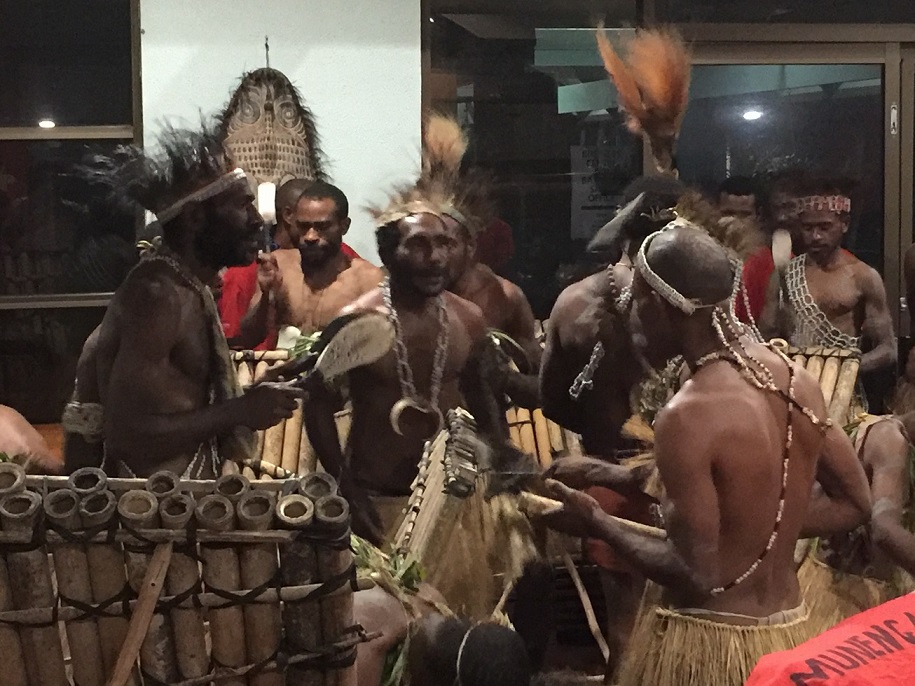 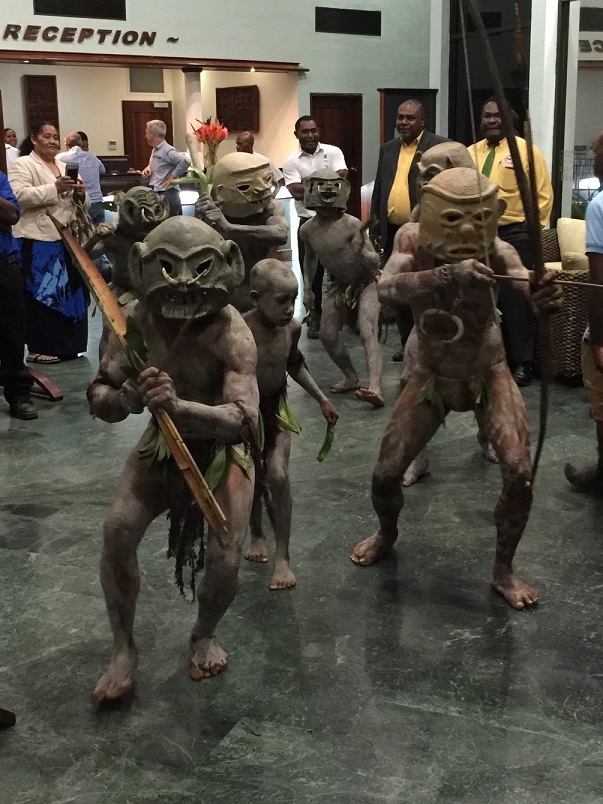 Day two of the event saw all the cuppers cup 63 of the coffee samples sent in by the co-ops. We cupped 7 flights of 9 coffees and by the end of it, I was on a coffee high even though I spat most of the coffees out! The judging criteria was based on the Specialty Coffee Association of America Cupping Sheet where coffees were judged on fragrance and aroma, flavour and aftertaste, body and balance. There were some really good coffees on the table this year. It showed a marked improvement over last year’s entries. 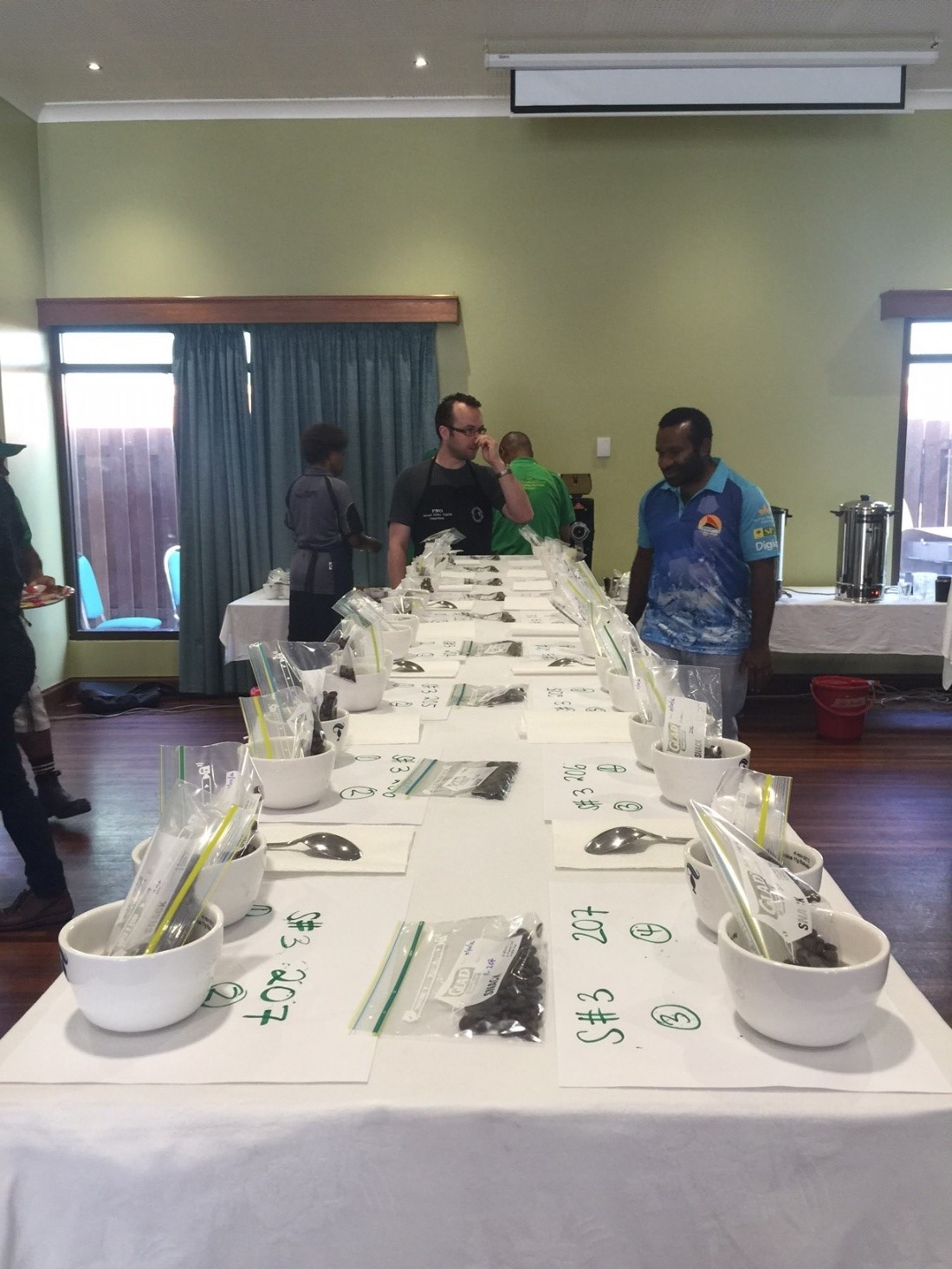 Day three marked the 2nd day of tasting the second half of the 128 coffees that were sent in by the small-holders. Again, there were a few stunners on the 7 flights of 9 coffee that we cupped. Cupping so many samples a day is quite a hard thing to. It actually took us 8 hours or so to go through all that coffee and by the end of the day, even though we spat most of the coffees out, the caffeine does still make its way to one’s system. I was physically exhausted after both days of cupping. We did manage to get out to the Coffee Expo which was running concurrently with the Coffee Competition. We were greeted to more stunning traditional dancers and music! It was a sight to behold. Everywhere we went, the locals were more than interested to hear what we had to say. They were hanging on to every bit of information that we gave them. This bodes well for the fledgling Specialty Coffee scene here in Papau New Guinea. I hope and pray that the small-holders will take the information and apply it to their farming practices and that next year we will see a greater improvement to the coffees grown and processed. 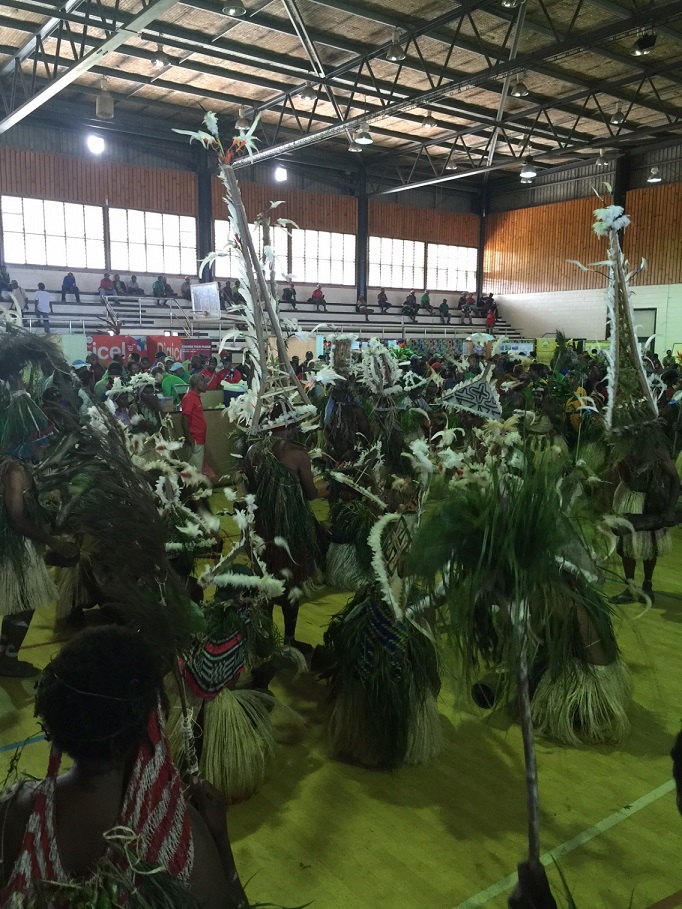 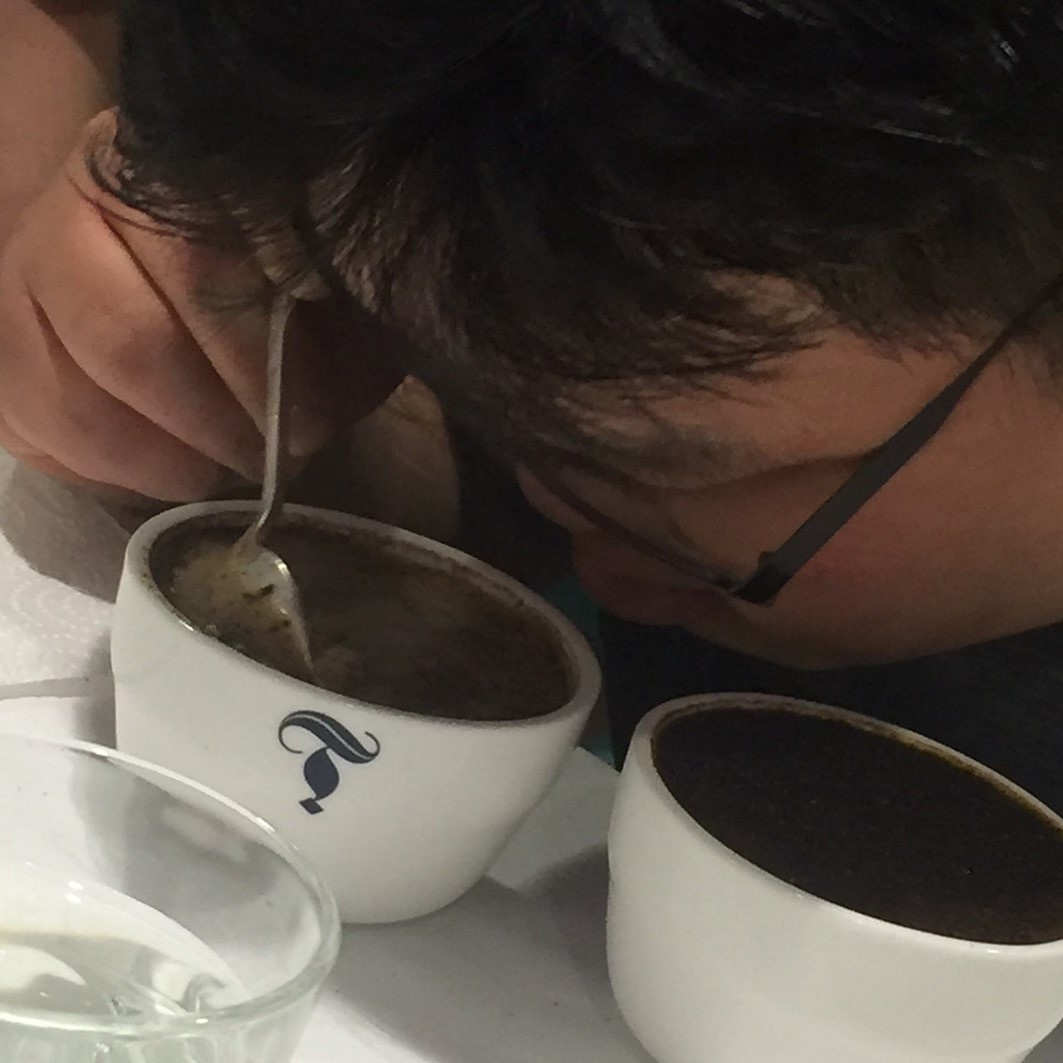 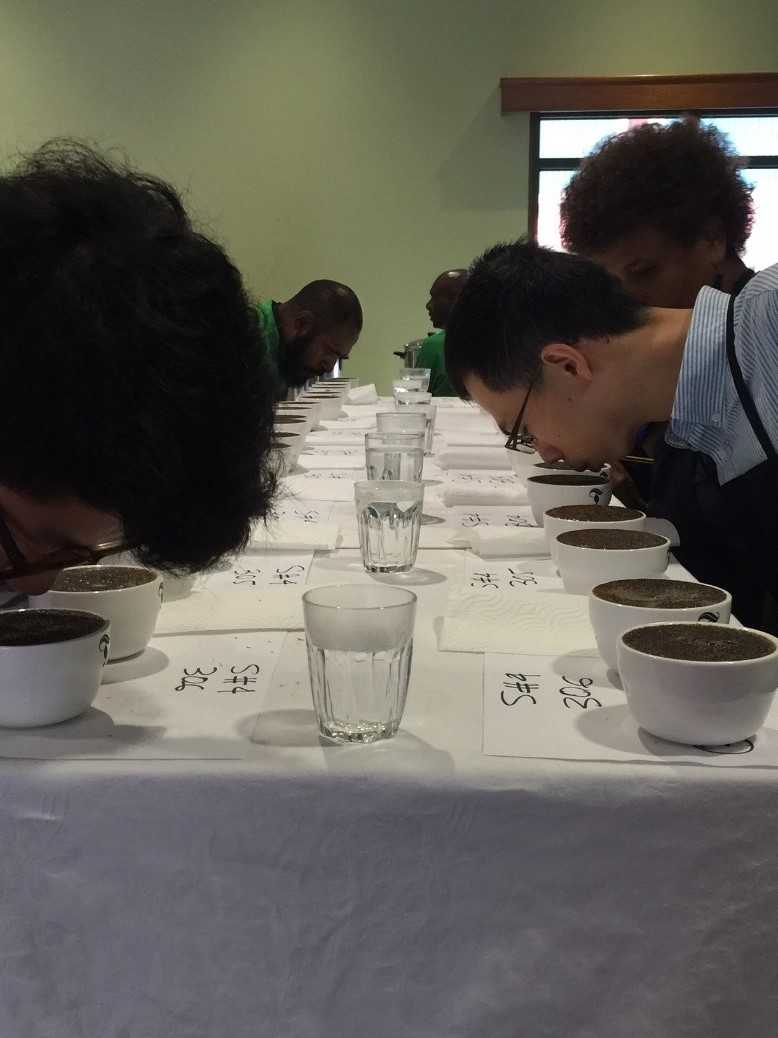 The morning of day four of proceedings, we begun to cup the top 24 coffees in earnest. We were really excited to see if what we cupped the previous two days would show up wonderfully again on the table. The coffees didn’t disappoint! We managed to find the Top 10 coffees which would go on to the final day of cupping and judging. We also had to judge 14 Robusta coffees which was something a lot of us in the panel haven’t done before. So after a Robusta calibration was done with us by, Sam Say of Bolaven coffee who is a Q Robusta Grader and Adi Taroepratjeka, who is a Q Instructor, we were ready to tackle the task at hand.

For those of you who don’t know what Robusta is, it is a different species of coffee.

Robusta is a sturdy coffee, one that is easy to care for, has a greater crop yield and has almost twice the amount of caffeine in it. It is also less susceptible to diseases than Arabica. However, it is low in acidity and high in bitterness and is used predominantly in Asian cultures where sugar and condensed milk are added to the drink to combat the bitterness. A very far cry from what we Q graders are used to that is high quality Arabica beans which are smooth and sweet and very easy on the palate. We had our work cut out for us! It wasn’t easy to get through the 14 coffees on the table but in the end, perseverance prevailed and there were a couple of coffees that stood out. Some even had flavours of soursop and caramel popcorn! From that group of 14 Robustas, the Top Coffee went on to receive an award.

As the sun rose on the final day of the competition, the panel of judges were ready to cup the final 10 coffees that made it through. We cupped the coffees in two lots of five and this time, it was actually harder to judge as the 10 coffees really presented themselves well on the table. Judging complete, scores were tabulated and we had found our winner! The coffee scored 85.75 points which is very respectable considering that the farmers have only begun to attempt to produce Specialty grade coffees in the last 2 years. The winner was announced at the closing ceremony that night. That afternoon, we invited the farmers to come taste the Top 10 coffees. A lot of these farmers have no clue what their coffee tastes like. We also took the opportunity to talk to the farmers in regards to how quality affects the price of the coffee they are trying to sell and how they can better improve their crop and processing. The farmers took in what we had to say eagerly and I’m sure we’ll find a huge improvement in next year’s crop.

The closing ceremony was a huge event. Many of the farmers were invited and they came by the busloads. The Coffee Industry Corporation (CIC) threw a dinner for all involved; 2 massive buffet lines in two separate parts of the hotel! Again, there were traditional performances by the PNG locals and it was a stunning sight to say the least. You had to be there to experience the intensity and colour of the performances! 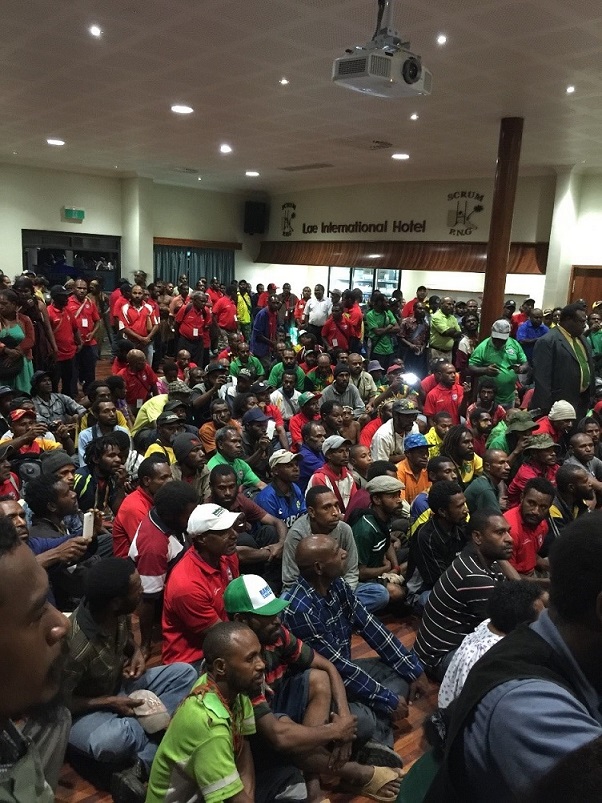 Official proceedings started after dinner with speeches given by various officials. The one that really got me was presented by the Agricultural Minister who gave a rousing speech as he challenged the farmers to change their mindsets as to how to better themselves and their crops. One of the big things was to encourage them to grow new coffee trees. The average age of the coffee trees in Papua New Guinea is about 30 years old and that is when crop yields start to drop off. To help the farmers out, the government has agreed to help the farmers out by giving them coffee tree saplings for them to grow new trees. It’s really heart-warming to see a country’s government rallying around their farmers.

After the speeches, it was time to announce the winners of the competition. You could cut the suspense in the air with a knife! There were a few smaller prizes for the best coffee of a particular region and of course the Top 10. The prizes this year were monetary. Not in a cash sense but winning projects, (ie: new equipment, improving infrastructure of the farms.), worth a certain amount of money. The prizes ranged from K1000 to K30000 (AU$12400) in project form for the top coffees.

After giving out the smaller awards, it was time to announce the big winner. This year, the best coffee was from the Timuza Cooperative from the Kainantu District in the Eastern Highlands Province! The coffee is of the Typica variety which is grown at an altitude of 1820-1890MASL in red and black loamy soil. There was a collective shout of joy from all the Eastern Highlanders present! The prize was given out by the governor of the Morobe Province, Hon Kelly Naru to the Co-op leader, Mr Offi Ifu. A generous K30000 in project form was awarded to the Co-op which will go into improving their farming practices and infrastructure of the co-op. I’m sure next year’s crop will be a whole lot tastier! 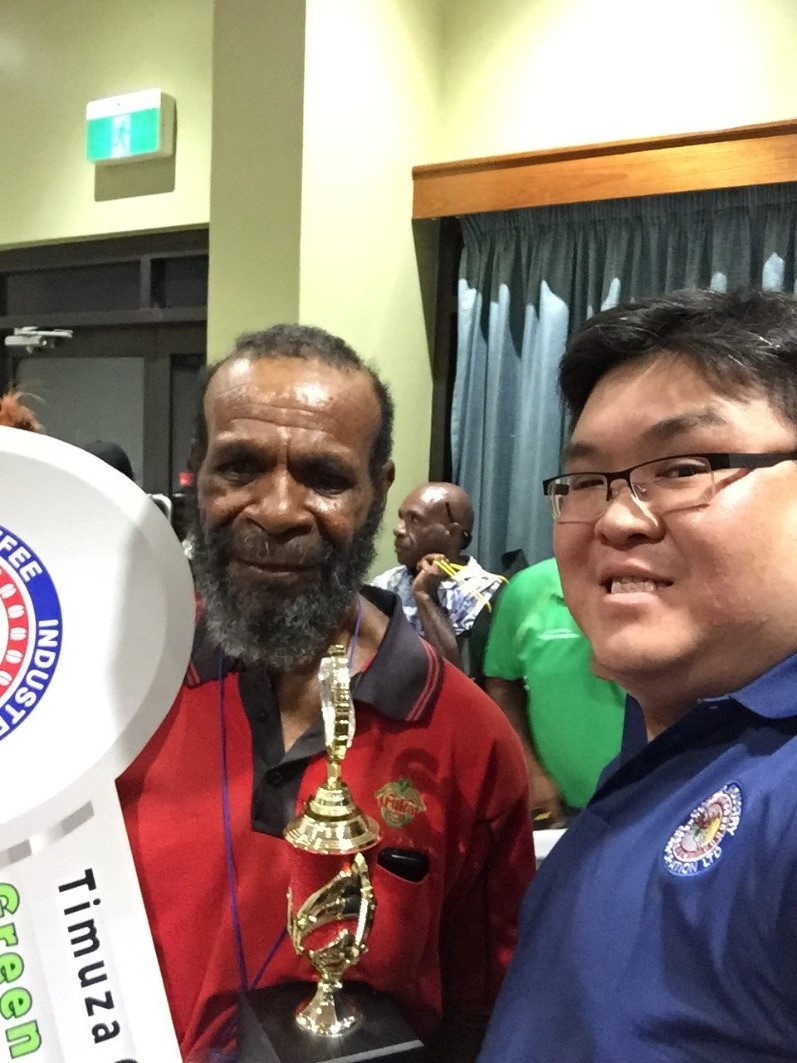 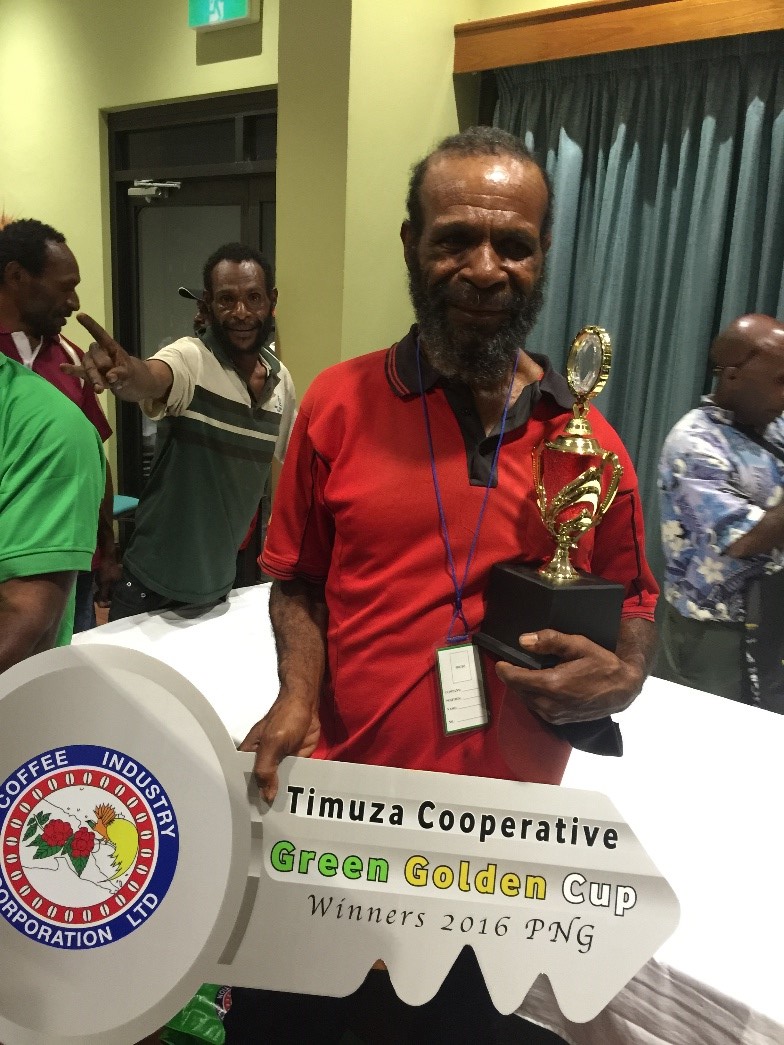 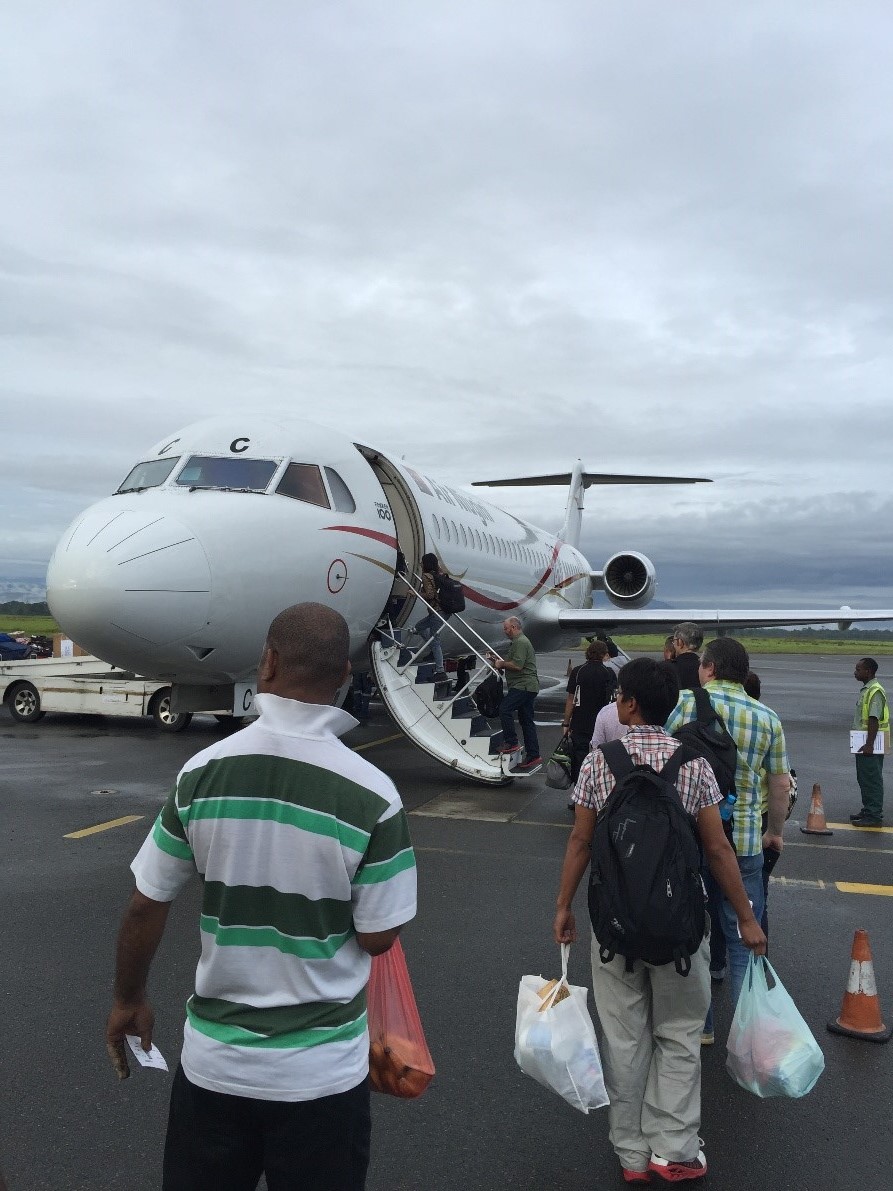