On the 10th and 11th of September, I had the honour and privilege of being invited to judge the first AMALFI Latte Art Championship in Beijing, China. It was held at Easy Home Shopping Mall. 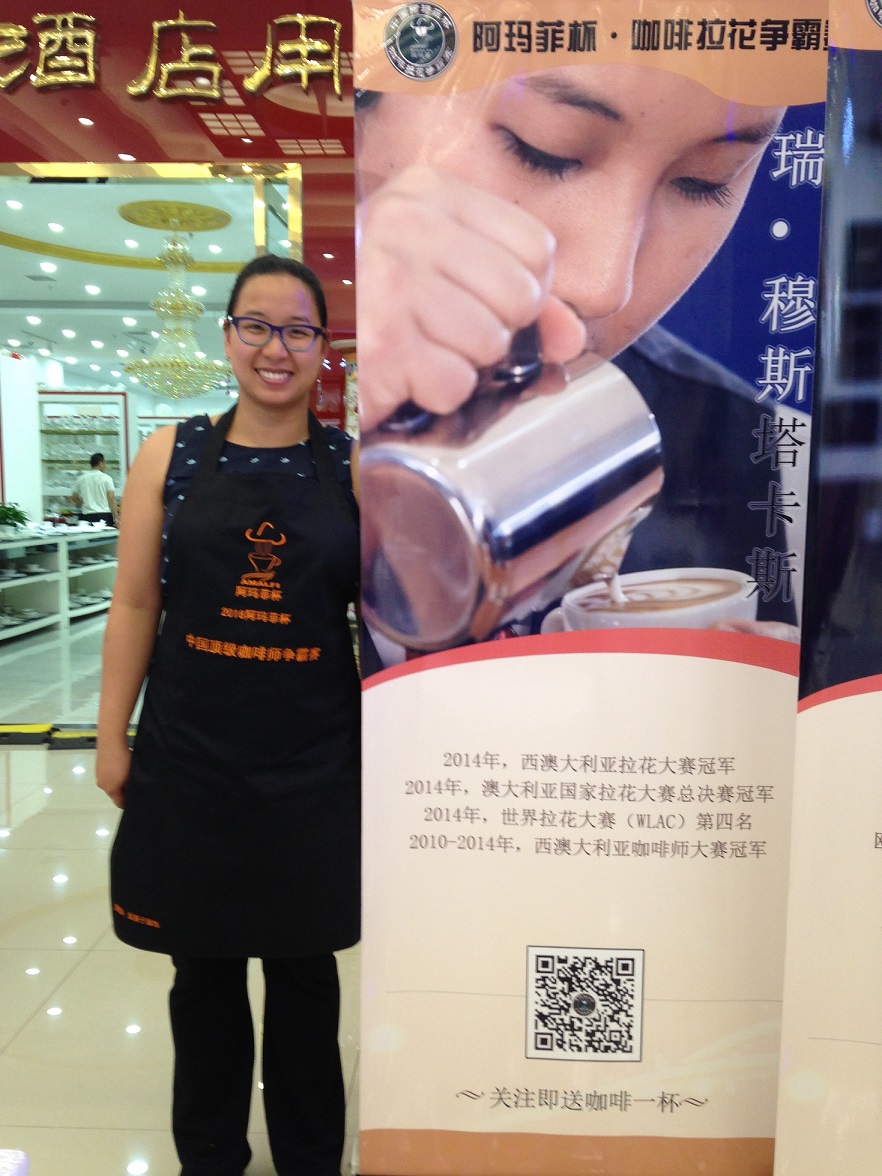 Standing next to a huge poster of me with my credentials 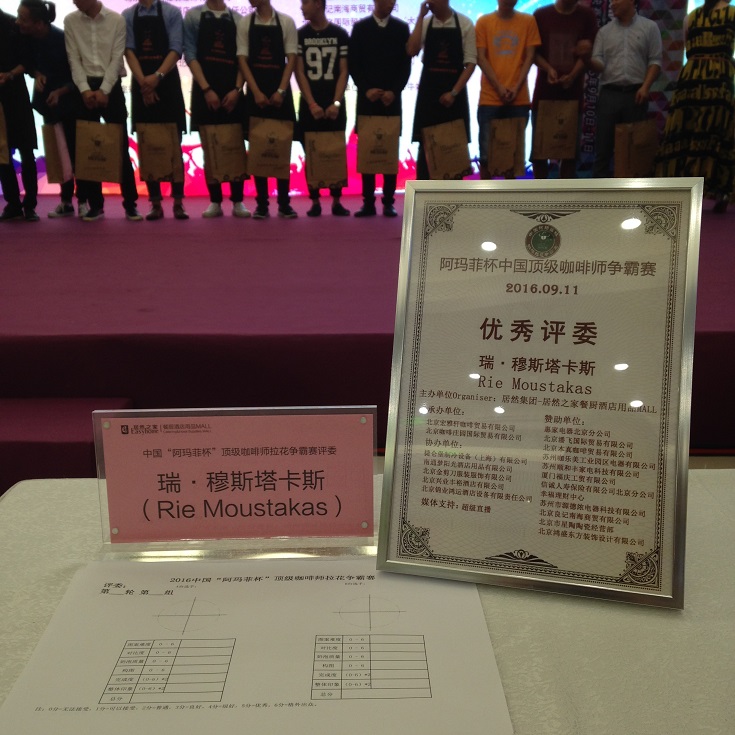 My front row seat, with name in Chinese and my framed certificate for judging

The Competition
42 baristas with prior competition experience were invited from all over China to compete.
In the first round 18 baristas were knocked out, leaving 24 to compete in Round two. Round three saw another 12 knocked out. In Round four, from the top 12 it came down to the final 6.
For the first two rounds, competitors had their own work station, and two competed at the same time and had a time limit of three minutes for one coffee. If they go over time they were disqualified. The final two rounds, competitors were given six minutes to pour the same pattern twice, and those who got through to the finals were not allowed to pour the same pattern from previous rounds. All competitors were only allowed to free pour ie. Not use etching tools or surface decoration.

The score board showing who got through to the next round. 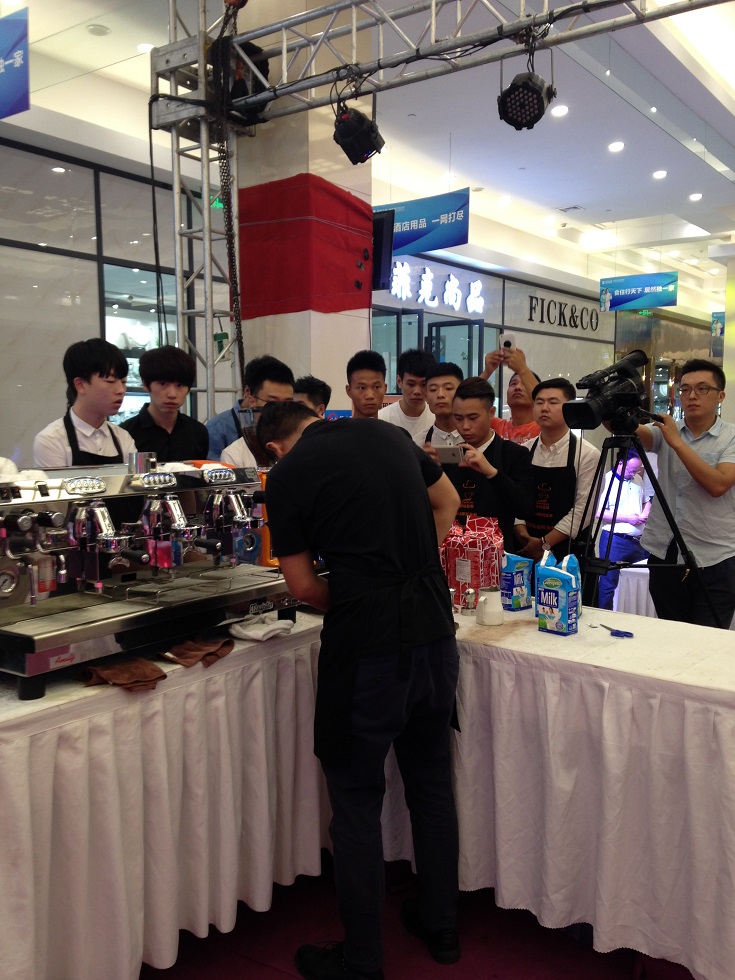 Scoring
All judges used the same scoresheet.
The scoresheet was loosely based on the WLAC (World Latte Art Championship) using a scale of 0 to 6. Competitors were judged on:
• Difficulty of the pattern. Eg a double swan scores higher than a single tulip as it is more difficult to pour.
• Contrast/definition between the brown crema and white foam. Eg. Points were deducted for any washed and bleeding parts.
• Foam quality – foam must be glossy/shiny, silky texture with no bubbles.
• Harmony, size, position and balance of the pattern in the cup. Eg. 3 o’clock handle, pattern not touching the edge, elements are symmetrical.
• Overall appearance – looking at the pattern as a whole.
• Judges Total Impression – Hospitality and customer service skills like eye contact and smiling. Their workflow, cleanliness (no spills down side of cups and jugs) and hygiene (no touching rim of cups) etc. 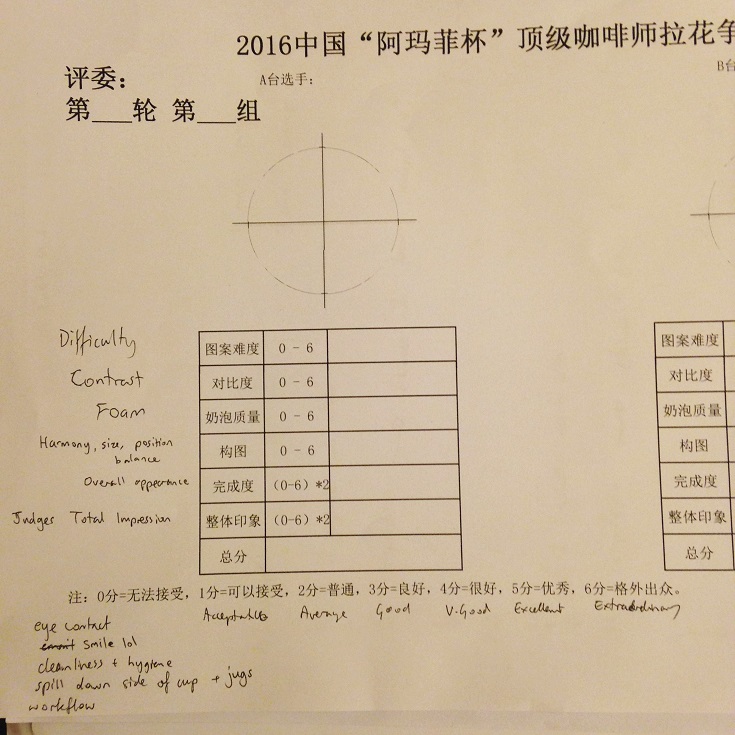 Example of the scoresheets used

The Prizes
The prize for 1st place was RMB$66,666, equivalent to AU$13,300! When the prize was given, they brought a money counter on stage so everyone could see the winner’s prize money counted to the exact amount.
2nd place prize: a commercial coffee machine. Two men had to carry it onto the stage to present it.
3rd, 4th, 5th and 6th places: stacks of prizes from generous sponsors.
Plus all competitors got a show bag and framed certificate of participation. 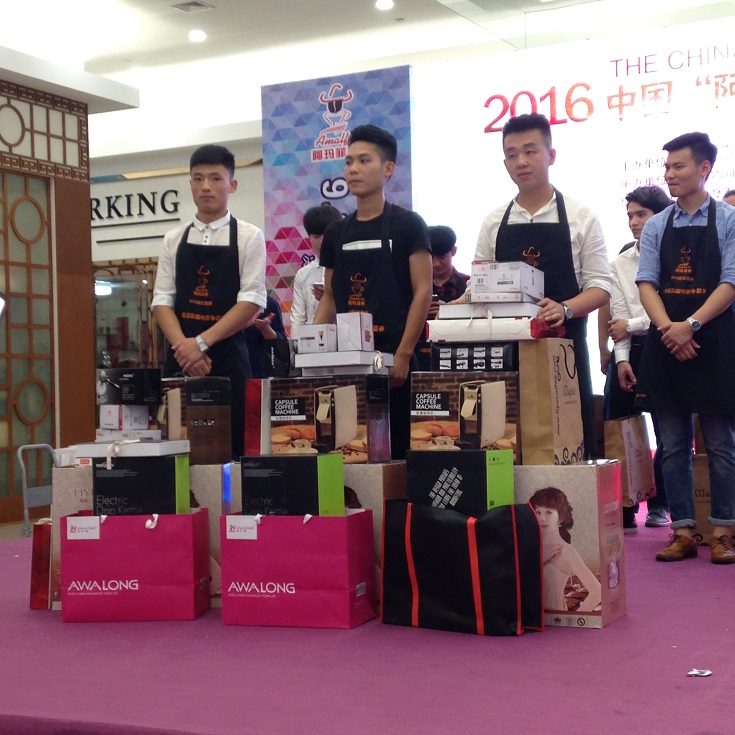 4th, 5th and 6th place and their prizes 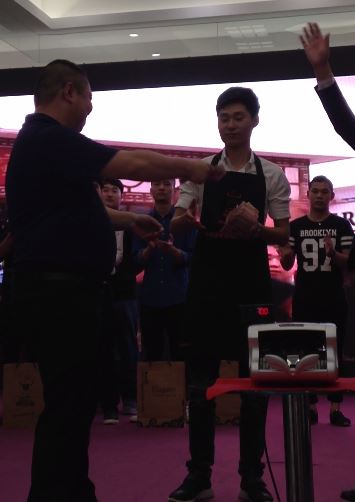 1st place with the money counter

The Judges
The panel of 5 international judges included:
• Myself – 2014 Australian Latte Art Champion, 4th place in 2014 WLAC.
• Choi Seongil from Korea – CEO of Seoul Coffee School, COE (Cup of Excellence) judge, certified WBC (World Barista Championship) judge 2009 to 2012, WLAC judge 2008, SCAE (Specialty Coffee Association of Europe) National Coordinator and Q Grader.
• John So from Hong Kong – Owner of 18 grams, certified WLAC judge 2015 to 2017, 2016 Hong Kong Barista Championship Head Judge, 2013 to 2014 Hong Kong Barista Championship judge, 2013 to 2014 Hong Kong Syphon Championship judge, SCAA, Q Grader.
• Jianfei Lee – 2013 China Latte Art Champion.
• Xuechao Wang – 2015 China Latte Art Champion, came 2nd in the 2015 WLAC (Australia’s Caleb Cha won that year). I met Xuechao Wang in Chengdu 2015, where I was invited to do a share session of my experience at the WLAC in 2014, and about the Rules and Regulations. He was in the session and asked a lot of questions. Later that year he became the 2015 China Latte Art Champion!

Judging is quite mentally exhausting. If you are a competitor, once you have finished competing you can relax. But judges have to be so focused from the first to the last competitor for the whole day.
With the high number of competitors, judging had to happen very fast so you had to think quickly, score and write quickly for all coffees presented to you. 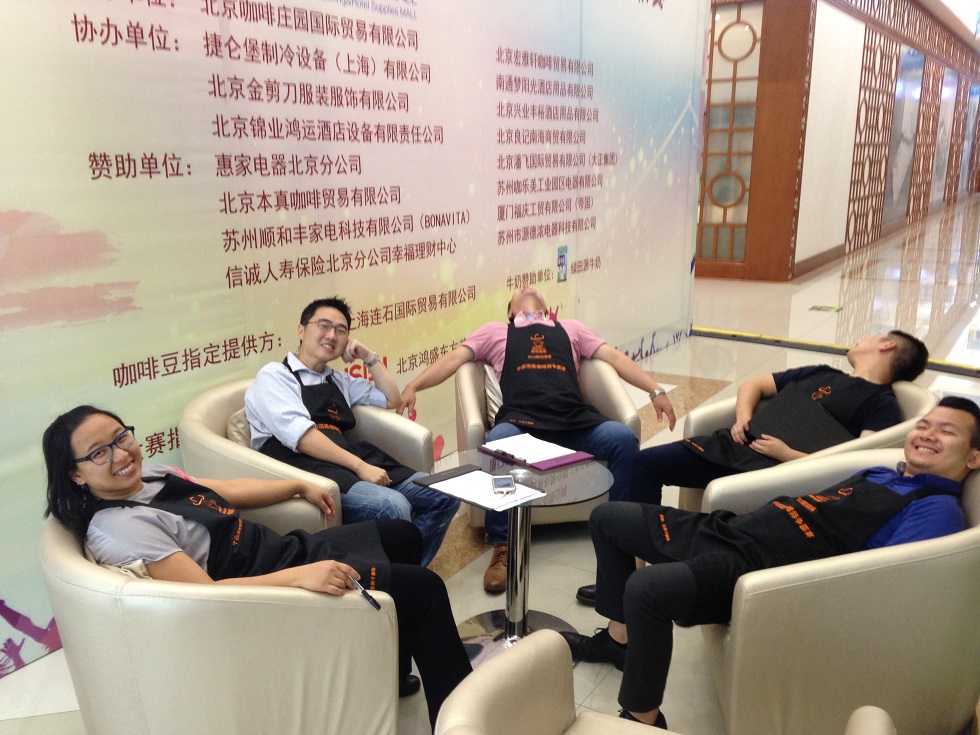 The judging panel calibrating in the back room after a round of competitors. You can see how tired we are! 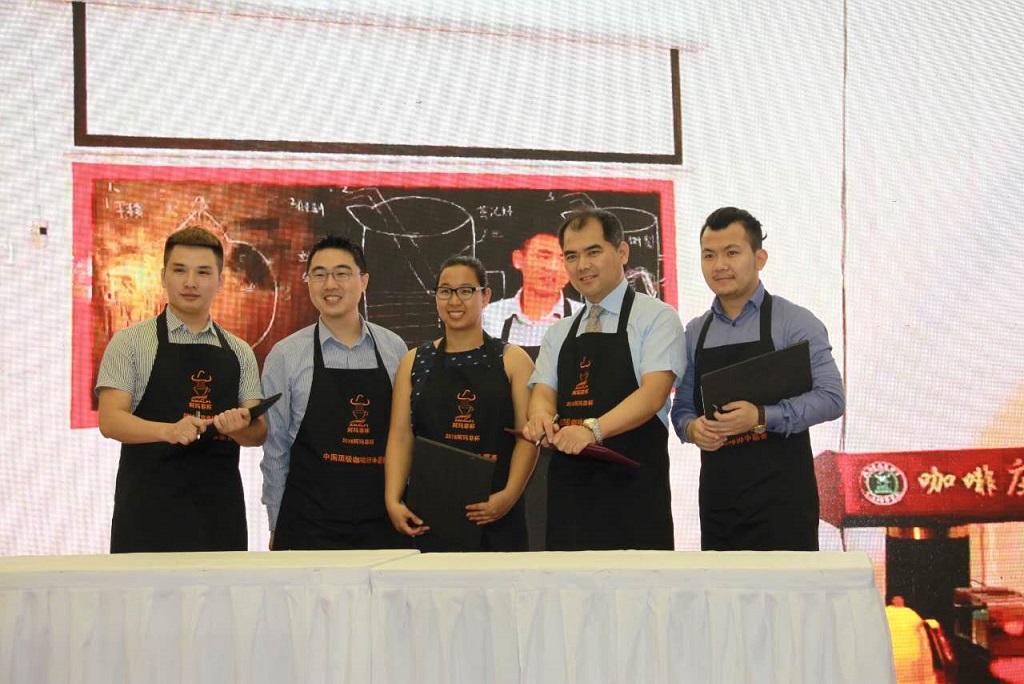 The judging panel on stage

The Latte Art
It was a tight competition. Sometimes the scores came down to half a point on contrast! Chinese latte artists like to use a lot of elements in the cup. For example, one cup might have two swans, few rosettas and a flower!
In no particular order, here are few of the patterns poured: 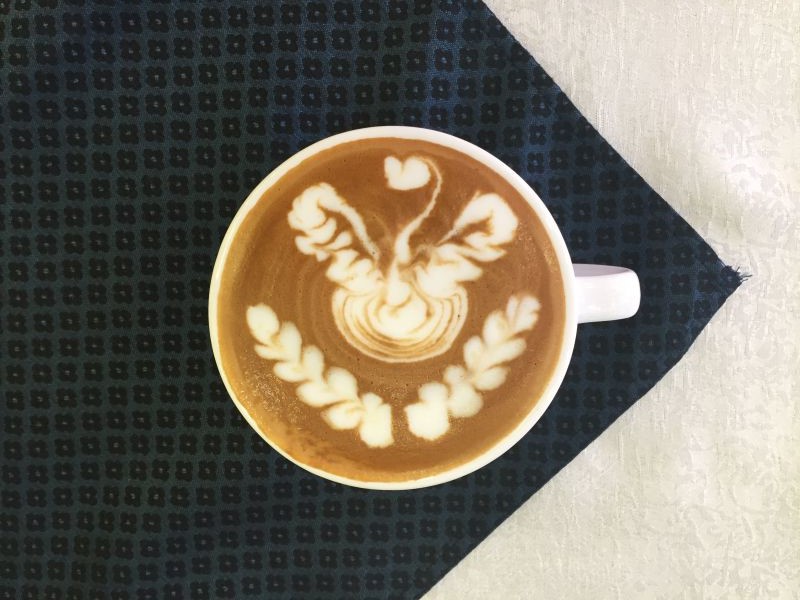 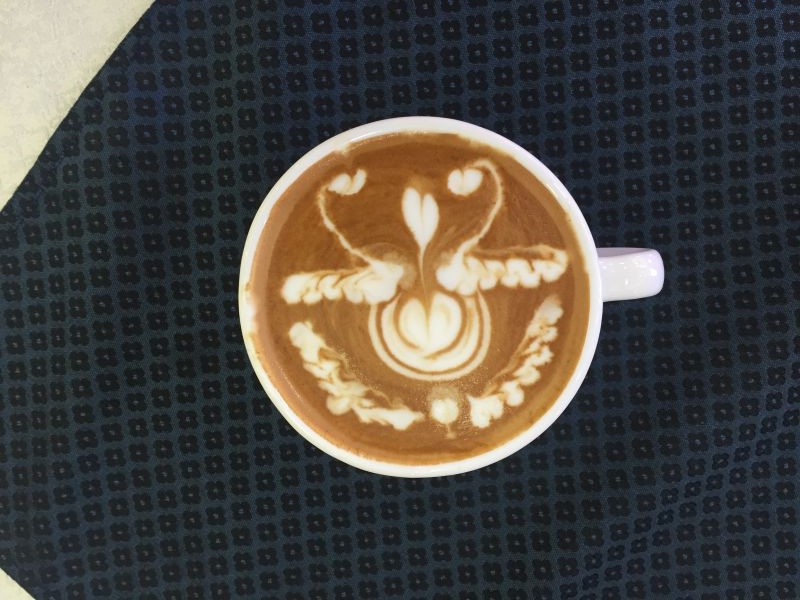 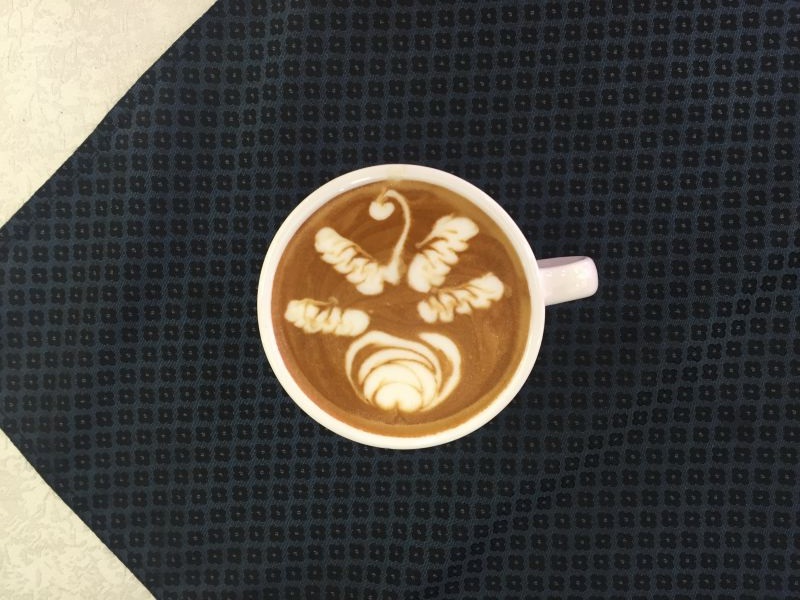 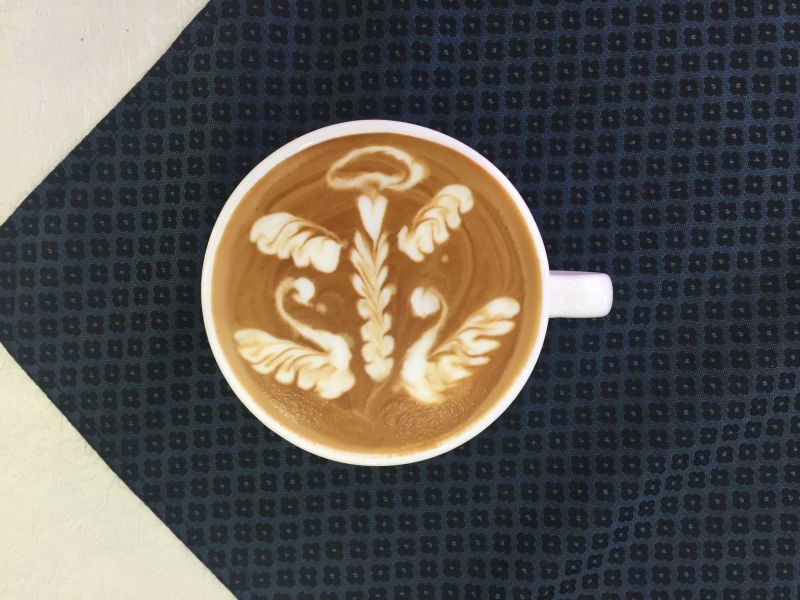 China Competitions
Coffee competitions in China are usually heralded with an official opening ceremony. Speeches are given, everyone is introduced (including sponsors, judges etc), and group photos of judges and competitors are taken. This can last up to two hours.
They would conclude with a grand (or GRANDE) closing ceremony where all competitors are invited on stage to receive their certificates and prizes.
I had a fantastic time and I learnt a lot from this experience. It was inspiring to see the talent of Chinese baristas. I hope to go back to China soon! Thank you AMALFI for inviting me to be part of this competition!